When I was a few days shy of my 19th birthday I got my first full time job. I was a computer technician at a computer store in Red Deer.  I’d just completed a year at Red Deer College and was ready to step into the real world.

When I was a few days shy of my 19th birthday I got my first full time job. I was a computer technician at a computer store in Red Deer.  I’d just completed a year at Red Deer College and was ready to step into the real world.

With that job came my first business card.  I can still picture it.  Single sided, company logo at the top, the list of cities that the company had locations directly below the logo.  On the left was the store’s address. On the right was the store’s phone number, fax, and email.  Above that “Brennan Tallack, Technician”.

We take for granted these little cards.  Of course many get lost, thrown out, or tossed aside never to be seen again.  But many don’t.  Some people keep a collection of these cards, some make digital copies.  Some keep them with the things they associate them with.  When I was a computer tech, I’d often find my card taped to the computers brought in for service.  People would call in and they would ask for me by name.  All because I’d helped them out and given them a card.

Over the nine years I worked at that company I held a few different positions and had a few different cards to match.  In my adult life I figure I must have given out more than ten thousand business cards.  I still get people stopping me in the street asking me if I’m that guy from that computer store.  When they do, they often ask me what I’m up to now and ultimately I give them a new business card. 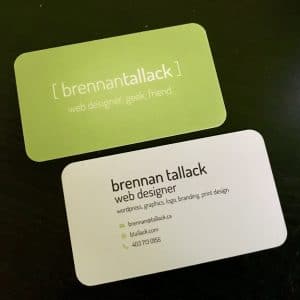 Today I got some new business cards.  These ones say “Brennan Tallack, Web Designer, Geek, Friend.”.  Really, they could have just said “geek” and been a pretty accurate portrayal of me.  Over the last fifteen years I’ve done a lot in the tech industry.  Some I was passionate about, some I wasn’t.

Design tends to be the one thing I keep coming back to.  The one thing I’ve always done over the years and really enjoyed. I started when I was in middle school as a hobby.  Now it’s my career.

So here I am.  That same geek from that little computer store on Gaetz ave.  Here to help you with your web site, graphics design, logo, or yes, even your business card.

We're looking forward to bringing your creative vision to life.